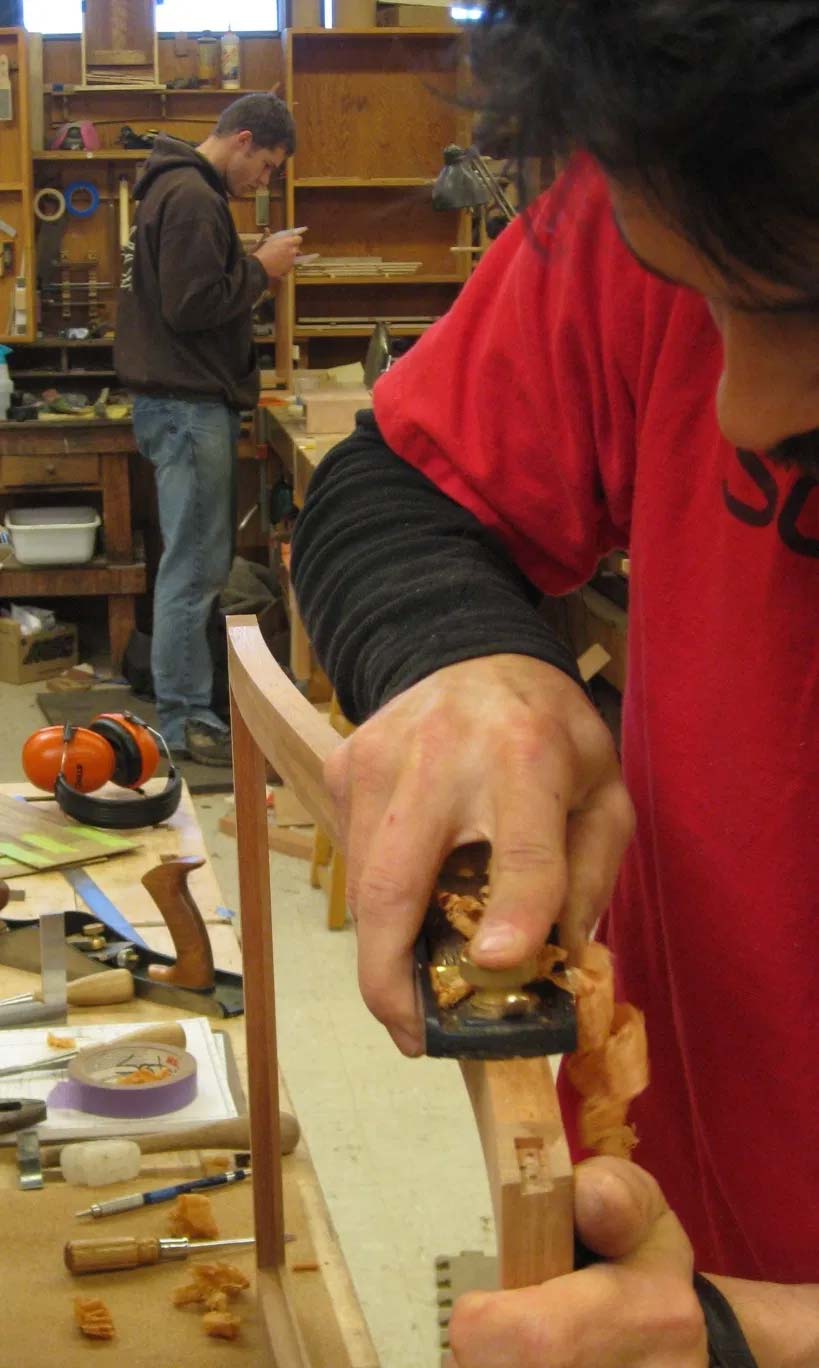 I moved from Florida to Denver in 2007; I was following a girlfriend, a dream and an expectation of being a furniture-maker’s apprentice.  I found a guy named Ethan Hutchinson who was making fabulous chairs; he just happened to be losing his apprentice and needed a new one. Well, because I go all in and I take people on their word, I bought a small crappy house about to be foreclosed on 2 miles from the shop, packed my bags and met my girlfriend in this fairytale dreamland. Well kinda. The house, as many foreclosure houses are, was a wreck. A couple of 20 yard roll off dumpsters, a gutted bathroom, new floors, new paint and some heavy landscape work later, it was pretty nice. It took me about a month to complete. I had the time to complete the renovation because on my fourth visit to Ethan’s, his shopmate told me that the chair-maker was making Sam Maloof  knock offs, they weren’t original and that Ethan was a flake and couldn’t be counted on for anything. I thanked him for his candor and moved on.

I am not one to let something silly like that stop me, so I found a talented Art Deco furniture maker/designer, Jeff Newell who would give me a $10 an hour job doing his milling and prepping of parts. I was so excited I could have exploded. I showed up early every day and stayed late. I could not believe how different furniture making was compared to carpentry.  A 1/16″ gap is a total failure.  Fillers?  Can’t use them.   Gaps?  Can’t have them.  Nothing but an uphill battle. The learning curve was so steep for me. I learned that the complexity of a fine piece of furniture is amazing and when you are creating something contemporary, everything should be perfect. I was learning a lot and really loved many aspects of the job. However, there was an added pressure of not being able to use the profanity in which I am fluent and working on a cold concrete floor in a shop with extremely poor dust collection, no windows, and for people that didn’t make you feel appreciated.  So I made it about 6 months and then went to work for Walnut Woodwork Studio.

Walnut Woodwork was a lot of fun, everybody was great and I got to work in an historic castle of a house. The house was 13,000, yes, thousand, square feet. The head installer and I spent a great deal of time wrapping and fitting beams. Fitting, scribing and fitting some more. A great skill, but still not what I was shooting for.

So I applied to the College of the Redwoods, the school that happened to be started by Krenov, the guy who wrote the books that lit the fuse responsible for my journey. Man did I have my hopes set high and damn did it feel crushing when I got the denial letter from the school. I was put on the alternate’s list. At this point, my one year commitment in Denver was up.  The apprenticeships had been kinda disappointing, I lived through a record breaking Denver snowfall that took months to melt away, I sold the house and the girlfriend was a cheat. I drove back to Florida licking my wounds and bracing for the humid Florida Summer.

I returned home and within 3 days, got a call from the school. Two weeks before the program was to start, someone couldn’t make it and they called me. What luck! Well, sorta; I left out a minor detail. After getting my “alternate’s” letter,  I called the school and talked with a couple of the instructors and thanked them. I let them know how flattered I was to be put on the alternate’s list and how I would keep things open for them if by chance someone wasn’t able to make it. And I called them again, and probably two more times after that, so they knew I could be counted on.

I booked a plane ticket and off I went to the beautiful town of Fort Bragg, California. The rest is another post.